Aren’t these just THE CUTEST? 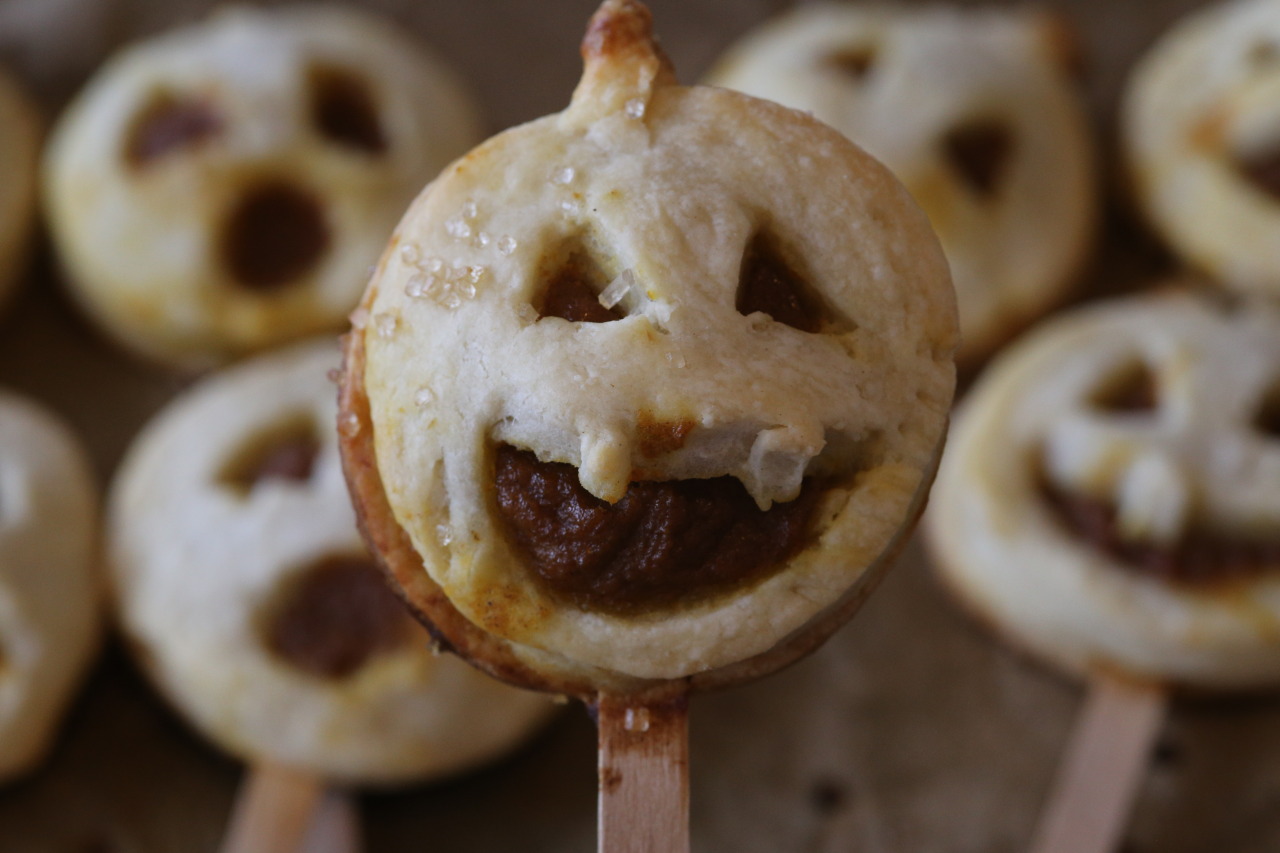 I’ve been wanting to make an easy vegan pumpkin pie for awhile. But then I thought, miniature food is always better, so I was going to make pumpkin tarts. Then I was at Starbucks during a long shift at work and got a cake pop, and thought, why not pumpkin pie on a stick? 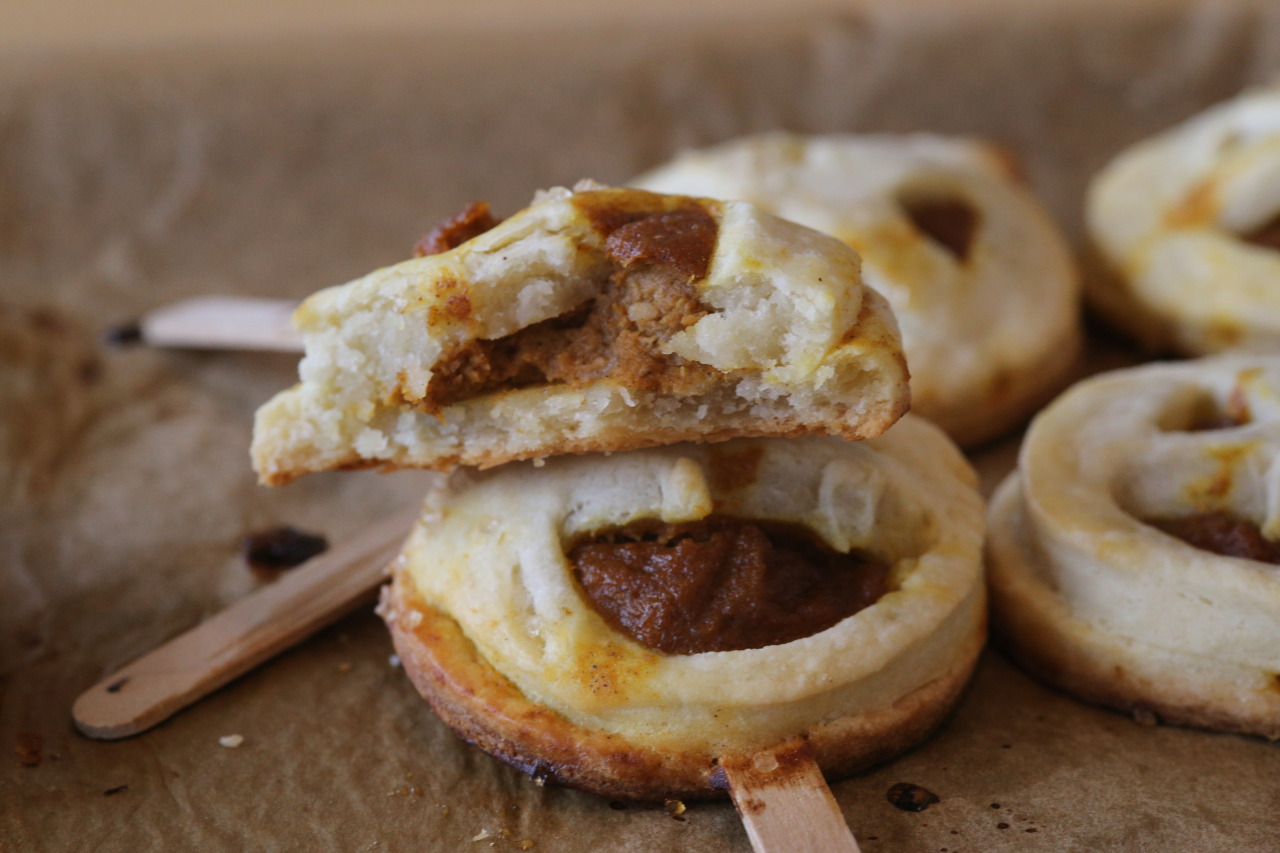 And they’re adorable! 3 bite pumpkin pies on a stick, so you can carry that pie pop around and show it off before you eat it. Obviously.

The vegan pastry is flaky, tender, and so so easy to make. Just use very cold coconut butter! I like to make the pastry the day before so it can get nice and firm again in the fridge overnight. I also like using a food processor for vegan pastry, since coconut oil melts so easily. 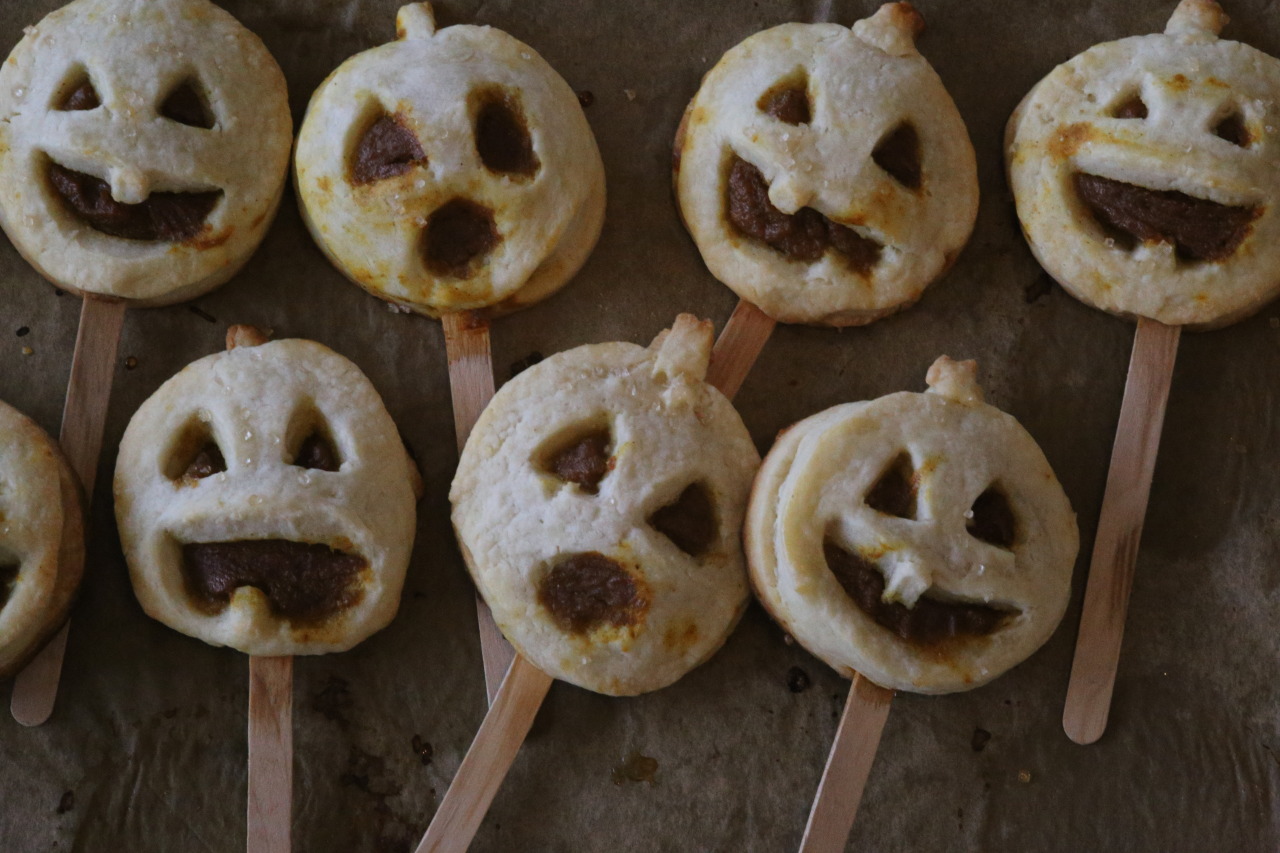 Once your pastry is ready, you roll it out, cut out little pumpkins (I just used a circle cookie cutter and made a little dent in the top to make it look more pumpkin-y). Cut out little jack-o-lantern faces in half the pumpkins, whip up an easy vegan pumpkin pie filling, and you’re good to go! 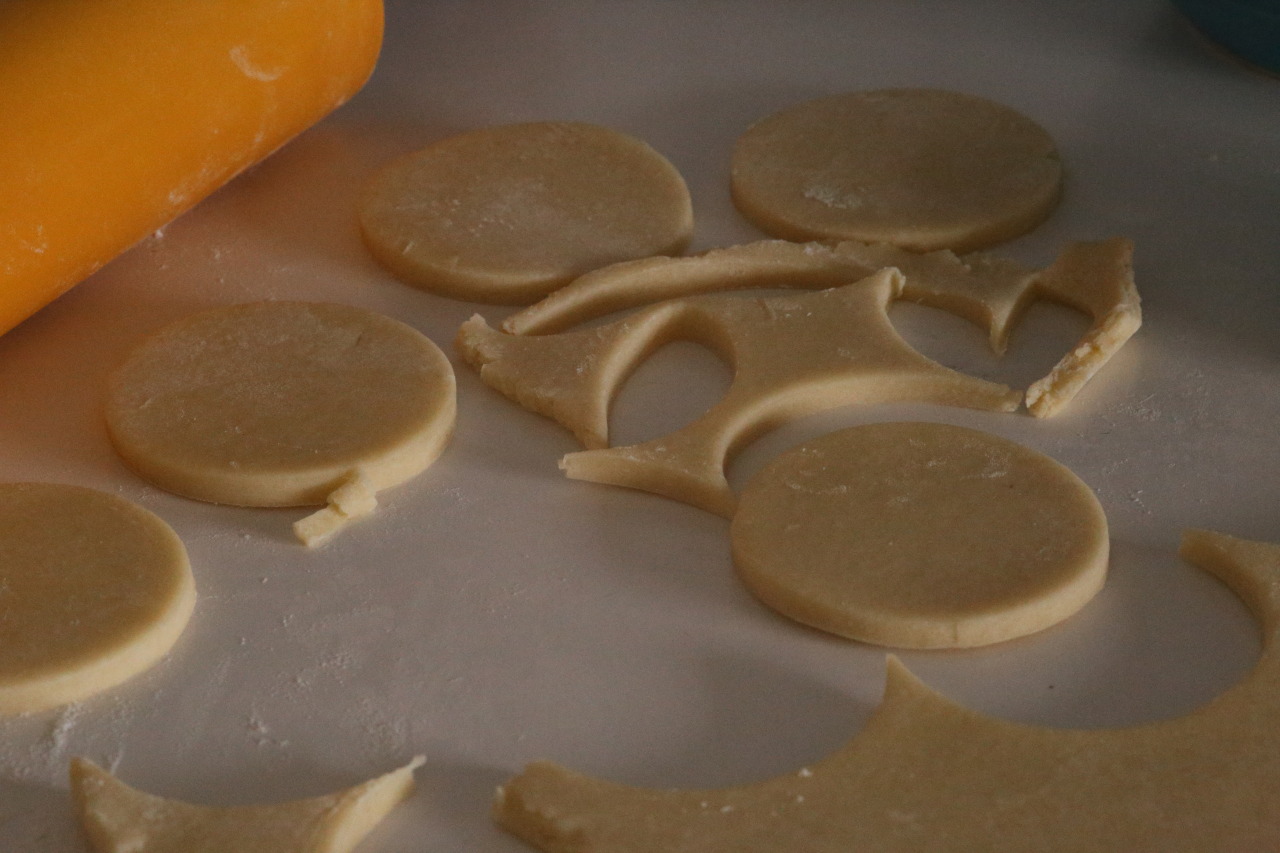 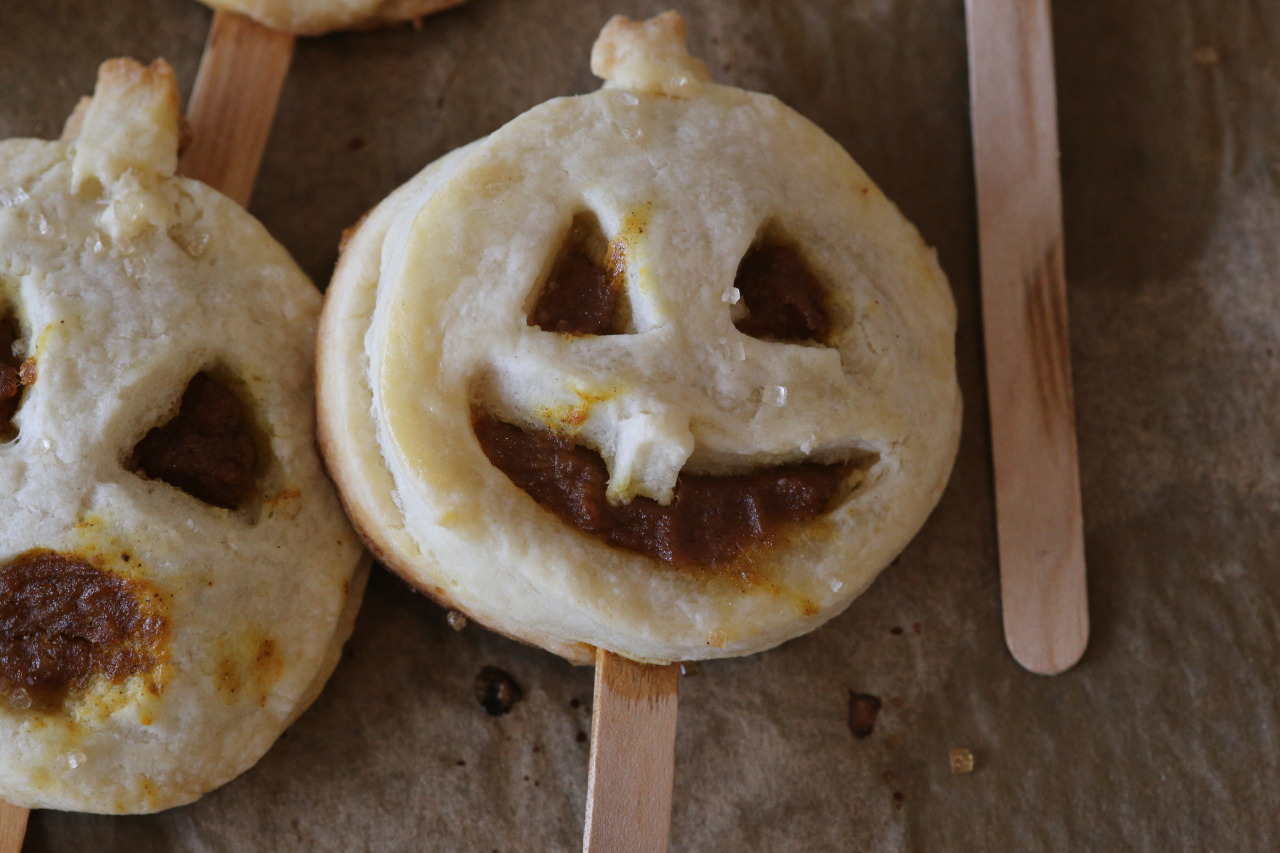 First make your pastry. In a food processor pulse flour, salt, and sugar a few times to combine. Add coconut oil and pulse until the mixture is nicely crumbly. Slowly add ice water with food processor running, until dough comes together. Form the dough into a ball, flatten, and wrap in plastic wrap. Chill overnight.

Roll out dough to 1/8 inch thick and cut out pumpkins (or circles, depending on your cookie cutter situation). Chill pumpkins 20 minutes. Cut out jack-o-lantern faces on half the pumpkins.

To make the filling, heat almond or coconut milk in a small saucepan until warm, and stir in corn starch. Stir well to combine. Remove from heat, and stir in remaining ingredients.

Preheat oven to 350 and line 2 baking sheets with parchment paper.

Place the pumpkin cut-outs without jack-o-lantern faces on a baking sheet and brush edges with extra melted coconut oil.  Press popsicle stick into the bottom of the pumpkin. Place 1 tbsp of filling in the middle of each pumpkin, and top with jack-o-lantern dough cut outs. Crimp edges to stick them together, and brush tops with coconut oil. Sprinkle with coarse sugar.

Bake until crusts are nice and golden, 20-25 minutes. 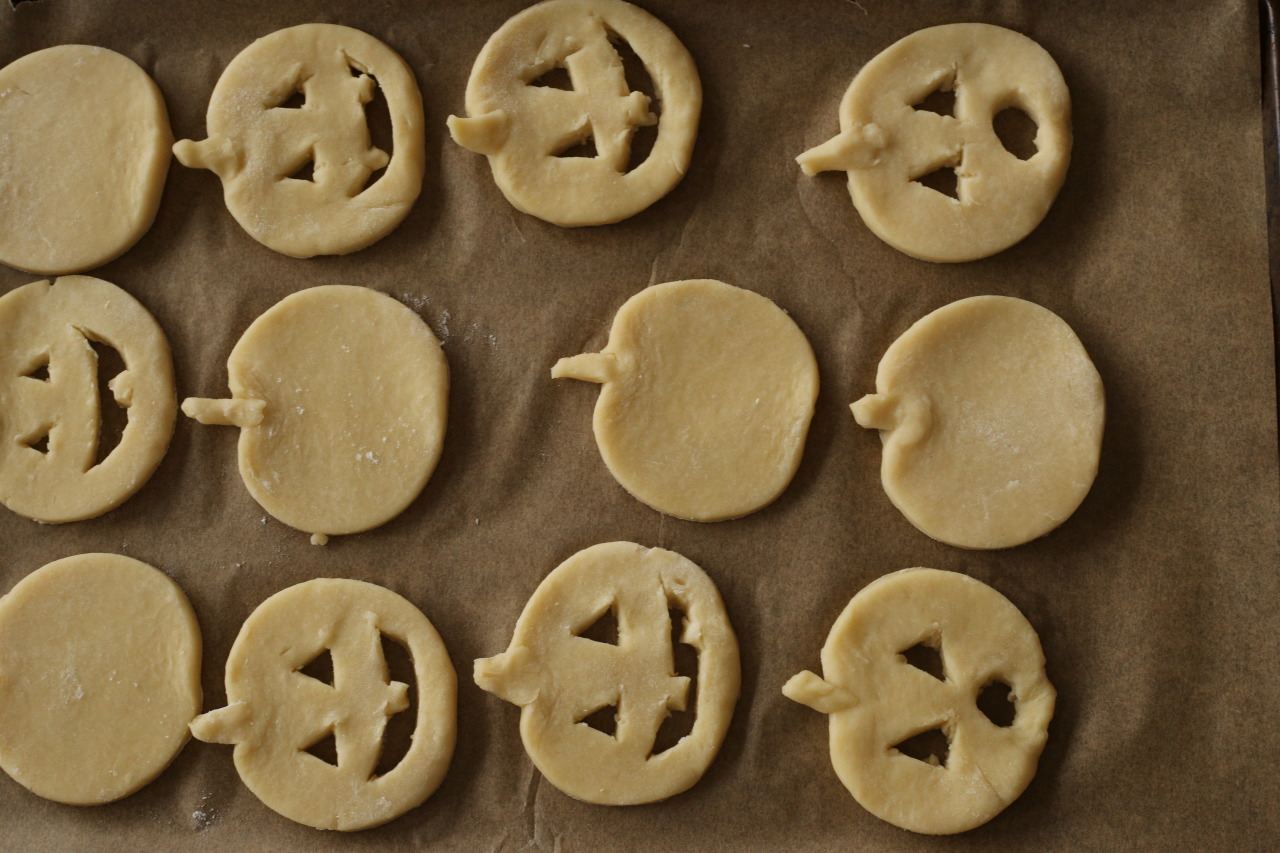